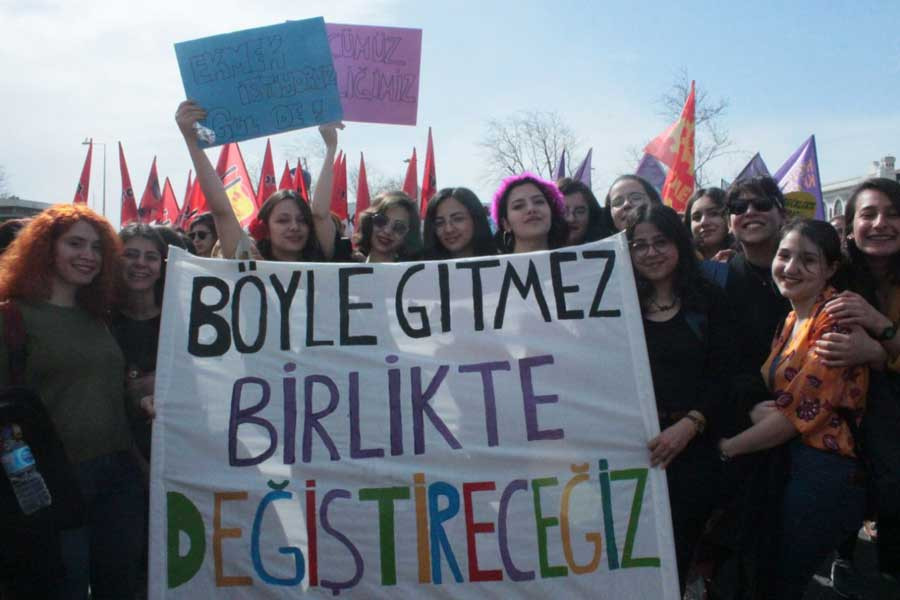 Women spend more time in the household so the pandemic couldn’t spread. This however doesn’t mean that our solidarity stopped. We try hard to keep being accessible by using every communication means including WhatsApp groups. We have to! Because violence against us has gone by far the worst…

We have spotted so many violence cases in the last 10 days. Violence has always been the leading agenda of our association even in the “ordinary” times. Now this extraordinary state of affairs shows us an enourmous increase in VAW. Plus one thing; a necessity that the government should declare and exercise an emergency plan to stop vilence.

THE POLICE COMES AFTER 5 HOURS, LOOKS THROUGH THE DOOR AND LEAVE

I got phone calls from two women exposed to violence even while I’m writing this piece.

As well known all places are shut down; coffee shops, bars, mosques, etc. Men are at home. A woman, mother of three children, got in contact with us through one of our members. Her husband is a factory worker. She tells us what this “seclusion” means: “Usually, he goes out to drink after the end of his shift, and comes home late. If my children and I was already asleep he wouldn’t assault me. But now he gets off the work and comes home at 7 pm with bottles in his hands. He drinks and drinks, then beats me. I finally called the police. They came after 5 hours, did nothing. What’s worse, they said to me ‘Corona pandemic is everywhere, no safer place for you to go, stay home’, and gave some advice to my husband.” We suggested her to call 183 (social support line) but told us that she couldn’t make that call while her husband is home. She has serious concerns about appealing to a women’s shelter; “What if they don’t accept my children…” “What if they don’t take necessary measures against the pandemic…” “What happens after this pandemic is over…”And so on… What we do in face of such major concerns is to produce our own solutions. In case of further occurrence of violence, she will leave a missed call so that we can dial 183, and call the police station on duty.

There is another women, a metal worker, in our neighbourhood who had a divorce case in this month. The trial is postponed like all courts are suspended within the scope of the pandemic measures. The husband who stayed at the workplace due to the court’s decision to suspension abused the pandemic and turned back to home by playing for sympathy of the woman and their children. He begged for shelter until he finds somewhere else to stay in couple of days. It took only three days before the violence came back. He escaped from the household because he well knows that the woman will call the police. “There are hundreds of women just like me. I made a mistake and let him in. But many could show the same mercy these days. Somebody has to stop it,” she tells.

BEAT OF ‘YOU GAVE BREADCRUMBS TO BIRDS’

Another woman who texted us explains the pretext of her exposure to violence: “I gave breadcrumbs to birds.” Breadcrumbs… “Actually I gave breadcrumbs to birds every morning. Now that he is at home for a couple of days, every move I make seems like an offense to him,” she says. This is not the first beat in the last 10 days. She already got 5 stitches on her head, products of the violence she exposed with accusations such as “Why are you watching this series? You are clearly in love with that actor…” She tells: “We are all stuck at home. He was watching nasty videos. ‘Don’t do that, we have kids,’ I said, ‘You do all these things outside. At least stop while at home. Kidsmight see them.” Her bruised neck turned purple all-over because of such challenge. “My mother-in-law lives in the opposite door. They came at my screams. When they asked ‘What’s happening?’, he said ‘This woman is a maniac, she’s jealous of me from videos.’ My younger brother-in-law laughed, ‘Oh sis, why are you making it such a big deal? He always watches these during the breaks at work.’” She has heard from TV channels that the courthouses are closed, and thought she couldn’t file a complaint. We told her that she can use all of her rights in every circumstances, the closure of courthouses are not an excuse for denying her appeals, and it is the duty of the police stations to take necessary actions. She is worried. Scared the hell of being sent to somewhere else during the pandemic.

A butcher in the neighbourhood called us. There is a woman in the streets, walking with slippers, her face covered in blood. The reason for the beat that makes her bleed such terribly: “You make noise and wake me up.” The noise she makes while preparing the breakfast for the kids became an excuse for the husband to beat her up so bad that the woman couldn’t think of wearing her shoes before escaping to save her life to the street. We immediately made a call and reported to the police, giving the details of the place. She was taken to the station. Gave up of making complaint.Went back to home.

Women are left alone with violence, with perpetrators in the households where they are closed down because of the pandemic. We observe that the majority of women feel “they should do whatever asked” to avoid increasing violence. Going out is already a difficulty for women in this country. Now that they are locked down behind the doors, any opportunity to call for help is taken from their hands.

Violence does not cease to exist. It is even more important to remember now that we do have rights under any circumstances.

According to the 6284 Law to Protect Family and Prevent Violence Against Women, it is the government’s unconditional liablity to protect women from violence in any case.

Corona days are no exception!

URGENT DEMANDS AGAINST VIOLENCE DURING THE PANDEMIC

Here are our demands:

· The government should prepare an emergency action plan against such a violent environment in which women are locked down behind the doors, feel much more vulnerableand helpless; all governmental bodies should inform and tell women about their rights against violence.

· Law enforcement forces should be warned about VAW to take necessary actions and precautions; it should be declared that women’s appeals cannot be ignored because of the pandemic.

· The government should take urgent measures so that any court’s decisions to suspension and protection are not delayed.

· Special precautions should be taken to avoid any possible flaws in the support and solidarity mechanisms; new and additional bodies to eliminate VAW should be founded according to new circumstances, and they should be accessible 24/7.

· The conditions in the women’s shelters should be improved; the measures to avoid the pandemic should be expanded.

· Legal procedures in cases of VAW should not be delayed; women’s secondary and tertiary victimization by long judicial processes should be stopped.

· There should be extra sanctions to stop violations of the women workers’ rights under the pretext of the pandemic, which in turn increase their dependency and insecurity. Workers’ right to paid leave during the pandemic should be recognised.

· All the ministries should immediately take practical and urgent actions for women who are victims of violence, divorced, and taking responsibility of their children’s care, therefore in need of financial support and other matters such as healthcare, education and care.

· There should be public announcements and special broadcastings in the media informing women about the institutions they can appeal in case of violence as well as their rights and government’s responsibility for ensuring their security.

· The government should reach out all women who are already exposed to or under the actual risk of violence, including those who have not been victim yet but living under the threat in the insecure environment caused by the pandemic; authorities should ask women in person and specify their needs that should be satisfied at once. 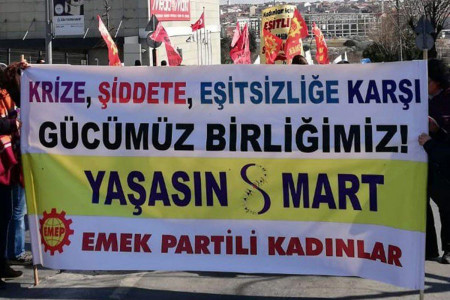 There are various claims regarding the emergence of the International Working Women’s Day and the ch... 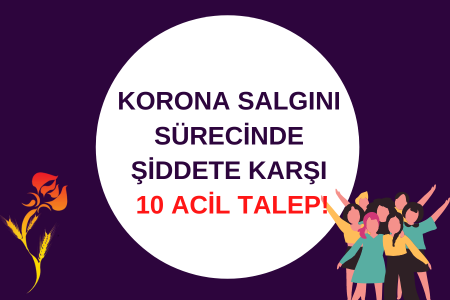 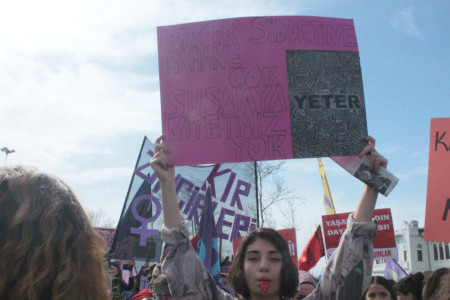